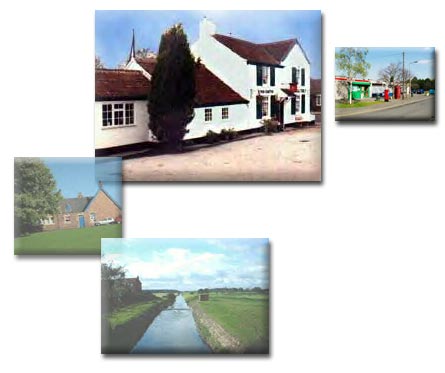 After the Norman Conquest

The Parish formed part of the ‘soke’ of Hexthorpe, and in the reign of Edward I, the Abbey of Begham in Sussex received the sum of 7 shillings rent from Alkley, Finningley and Blaxton. Reference to the ownership of the manor of Alkley by the abbey is made during the reign of Edward IV. The abbey was founded by Robert de Turnham and Joan, his wife, the great heiress of the manor of Hexthorpe. It is presumed that the abbey was the benefactor of the land by this connection.

Another Norman connection is made by way of the great barons Mowbray who inherited land in Nottinghamshire and Lincolnshire. The Church at Finningley was founded by the Mowbury tenants. Historical records identify that Nicholas de St. Elena and Alice Toukebeing returned a knight’s fee at the rent of ‘two marks at Finningley and Alkley’, whilst a Walter Touke is returned Lord of Alkley, and hence a connection with the Church at Finningley.

The interests of Nicholas and Joan passed to the name of Clitheroe amongst others and a co-heiress of Clitheroe married Thomas Green whose son was living in Alkley in 1585. Prior to this the Greens of Alkley had ‘entered their pedigree at the herald’s visitation in 1563’.

The pedigree is described as:

By the time of the Inclosure Agreement part of Alkley was owned by John Harvey, and the remainder divided between Childers Walbanke Childers and William Killam.

In the 1800’s the village is referred in historical records as ‘Awkley’, it’s boundaries formed partly by Nottinghamshire and Lincolnshire. Miss R.F. Walbanke Childers of Cantley Hall, and the trustees of the late William Cadman Esq. were Lords of the Manor and principle landowners.

The chapel was built in 1832, the National School in 1837 and the Church a year later. At this time the population was recorded as 362 inhabitants. There were two public houses, ‘The Eagle and Child‘ and the now absent ‘Plough’. The blacksmith, Samuel Garnett was next to ‘The Eagle and Child’ , and the landlord, Rd. Gillat was also butcher and shopkeeper. There was also a wheelwright and fellmonger listed, in addition to a number of farmers, amongst them Rd. Baxter (presumably at Baxter Farm at the corner of Bell Butts Lane and Main Street). The principle crops grown were wheat, barley, rye and turnips. Other buildings of note include the three storey pantiled Lidget, at the junction of Main Street and Hurst Lane, and the 18th Century farmhouse (partly destroyed) by The Green and Common Lane.

Archaeological interest in the area has centered around a stone axehead found in a field near Bell Butts lane, a Roman pot and Constantine coins found in and around it from an undisclosed site, and planks relating to the wooden Alkley Bridge of 1608.

In recent times a 6th -7th Century Saxon pendant of gold with semi-precious stones was unearthed at an undisclosed site near the village, and is on display in the main foyer at the Doncaster Museum.

By 1881 the population of Auckley had fallen to 278 and remained low until the 20th Century. The Royal Airforce established RAF Finningley prior to the Second World War, and in the 1960’s substantial housing development began with the Spey Drive Estate, followed by the Ravenswood Drive Complex, The Hollows, Ivy House Court, Riverside Gardens and Dursley Court. When RAF Finningley closed in 1996 the 500 married quarters were sold. Approximately 100 dwellings were purchased by the South Yorkshire Housing Association, and the rest by private individuals.

Three schools have been built to cater for the increased development:

Employment in the village itself is limited to agriculture, two sand and gravel quarries, and the retail trade, the majority of residents finding work in Doncaster, Sheffield, Rotherham, Wakefield, Leeds or further afield.

Auckley is a pleasant village which stands beside the River Torne. It lies approximately 5 miles from the town of Doncaster, but is set in rural surroundings and there is a sense of community amongst the residents. Anyone who loves the countryside has the choice of walking a number of public footpaths through open countryside, and there are a number of venues in the village where residents are able to meet, e.g. the local public house (Eagle and Child), the Anglican Church and Methodist Chapel.

In addition, we are fortunate to now have a new Parish Centre where a number of activities take place. These include the Mother and Toddler Group, Dancing Class, Simply Singing, Karate and Aerobics Classes, Line Dancing and Bingo, etc.

The Auckley Show Committee organise an annual Show at Riverside Park every August, and the All 4 All.

The Grey Lady of Auckley

Auckley has been home to a famous Grey Lady apparition who has made appearances at the rear of crowds, particularly at weddings and christenings for more than three hundred years. The story goes that she was the youngest daughter of a local chap who kept her as little more than a servant. She had little opportunity to meet men herself and so took solace in the happiness of others, and it soon became a custom at feast days to set a place for the Grey Lady and a special toast was made:

“We wish thee joy on this our celebration.
Come sit thee down and take a glass of wine.
And if you sup in our felicitation,
The hour is blest as blessed you may be”.

Keep up to date with what’s happening within the Auckley Parish Council, read our meeting agendas and minutes.

There’s lots of fun activities happening every week in Auckley, browse our activity calendar, come along and get involved.

This website uses cookies to improve your online experience. Some of the cookies (categorised as 'necessary') are stored on your browser as they are essential ... for the basic functionality of the website. Other third-party cookies (categorised as 'non-necessary') help us analyse and understand how you use the website. These cookies will be stored in your browser only with your consent. You have the option to disable (opt-out) of these cookies, but it may affect your browsing experience.